Drutex – the Construction Company of the Year

DRUTEX SA has received the ‘Construction Company of the Year’ title in the Builder Awards 2020 contest, and Leszek Gierszewski, the founder and the creator of the company, yet again has been named the Industry Personality.

The awards have been given for 18 years by the editorial staff and the Scientific Council of the Builder monthly. The awards go to companies in the construction sector for dynamic development and the position in the construction market. The basis for selecting the winners are their significant achievements in the previous year. Drutex has been awarded for the third time in a row. In the current edition also the president and founder of the company,  Leszek Gierszewski was named the Industry Personality 2020, just like in 2018 and 2019.

- I’m obviously delighted by the awards I have received since they confirm that our development is exceptionally dynamic. Although, in fact we are just doing our job and we’re moving forward. We have very high ambitions and – as I keep saying -    the best is yet to come. We are among Europe’s leaders, but we want to be on top and we’re doing our best to achieve it – says the president Leszek Gierszewski.

Las year was exceptionally successful for the Bytów company. DRUTEX, for the first time in its almost 36-year history, exceeded one billion revenue and it strengthened its position on the international woodwork market. 2020 was marked by continuous impressive investments. Not only did the company launch one of the most modern powder paint shop in Europe, but is also started the construction of a new office building and the high-storage warehouse. It increased its own transport fleet to over 400 vehicles, and it continues the process of production automation and robotization. It is worth pointing out that during the pandemic that affected numerous Polish companies, Drutex increased the workforce by 550 persons, as one of the biggest and most valued employers in the Pomerania. Plans for this year are also very ambitious. The company will start the construction of the biggest production hall covering ca 7.5 hectares. In total, the Bytów producer of windows, doors and roller shutters is planning to allocate over PLN 350 million to investment.

This year, due to Covid-19 pandemic the organizers were not able to hold the traditional great gala. The winners were announced online on 11 February. 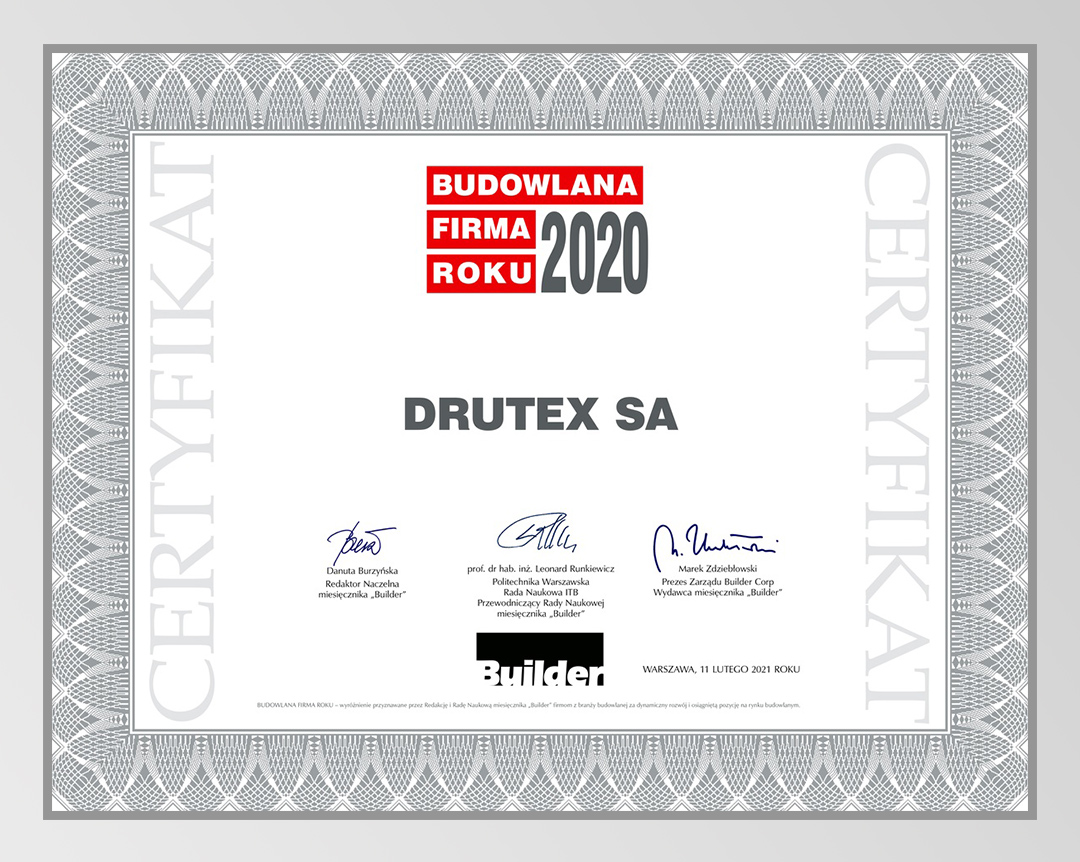