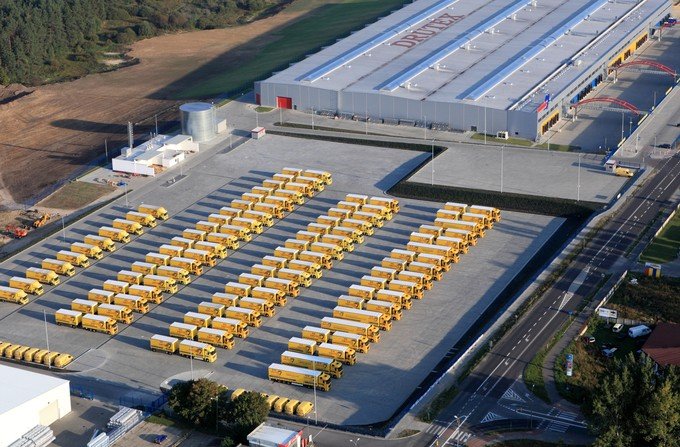 The great 2015 results stem from the popularity of the modern PVC window and door systems that constitute ca. 90% of the company total sales, and from the implemented investment in technology, development of the product portfolio and production capacity. Launching the first stage of the European Fenestration Centre, i.e. the production hall that covers the area of 30,000 m2, allowed the company to increase production capacity and to implement new production solutions, including own glass hardening plant.  Another important factor was enlarging the offer with the modern PVC lift and slide Iglo-Hs doors (perfect for the trendy terrace and balcony large-size glazing) and with Duoline wood and aluminum system, which are hugely popular with Polish and foreign clients.

What contributed significantly to the growth dynamics was export sales whose share in total sales amounts to 70%. Only last year the company recorded a 26% increase in foreign sales comparing to year 2014. The most important Drutex export markets are consistently: Germany, Italy, France and the USA. In those markets the company has achieved the highest sales dynamics. Drutex has also recorded a very big increase in Belgium and Great Britain.

Drutex exports all types of its products. However, the biggest share in foreign sales belongs to PVC windows and doors, including above all  Iglo 5 and Iglo Energy systems. Technological advancement, wide color range and solutions that are well suited to the specificity of each foreign market, allow the company to gain clients all over the world. What is important is also the fact that the company has certificates, attestations and technical approvals issued by independent certifying institutions all over the world, including Germany, the Czech Republic, Sweden, Norway, the USA and Australia. The speed of action is also a key strength. Efficient organization and own transport fleet that consists of more than 200 vehicles, allow Drutex to deliver its products in 7 days all over Europe.

„Drutex has been developing at a  double-digit rate for years. Each year we invest tens or even hundreds of millions zloty into company and product development, which translates into our continuous market success. We have been running intensive marketing activity in foreign markets for three years, and we have invited to cooperation the world-class footballers:  Lahm, Pirlo and Błaszczykowski. All these factors contribute to increasing interest in our products in Poland and abroad. The record, 19% growth dynamics last year has confirmed the efficiency of our operational strategy and it encourages us to further investments. We are on the verge of launching another production hall that covers the area of 25,000 m2, which will enhance our production capacity. We are enlarging and modernizing the machine park, we are expanding the transport fleet. We are preparing for the construction of another production hall and for the premiere of other products, including own external roller shutters system. We are proud to gain the appreciation of the Clients, especially that we already have one of the most cutting-edge production lines in Europe. It is confirmed by the high quality of our products’ – says Leszek Gierszewski, the president of DRUTEX S.A.

The second stage of the European Fenestration Centre, whose construction started in 2015, will be launched at the beginning of April this year. The company is currently equipping the production hall with machines and machinery for window and door woodwork production. Simultaneously, we are working on the new window and door systems. In 2016 Drutex announces the premiere of a few new products. At the same time, the company is increasing its scientific, research and technological facilities.