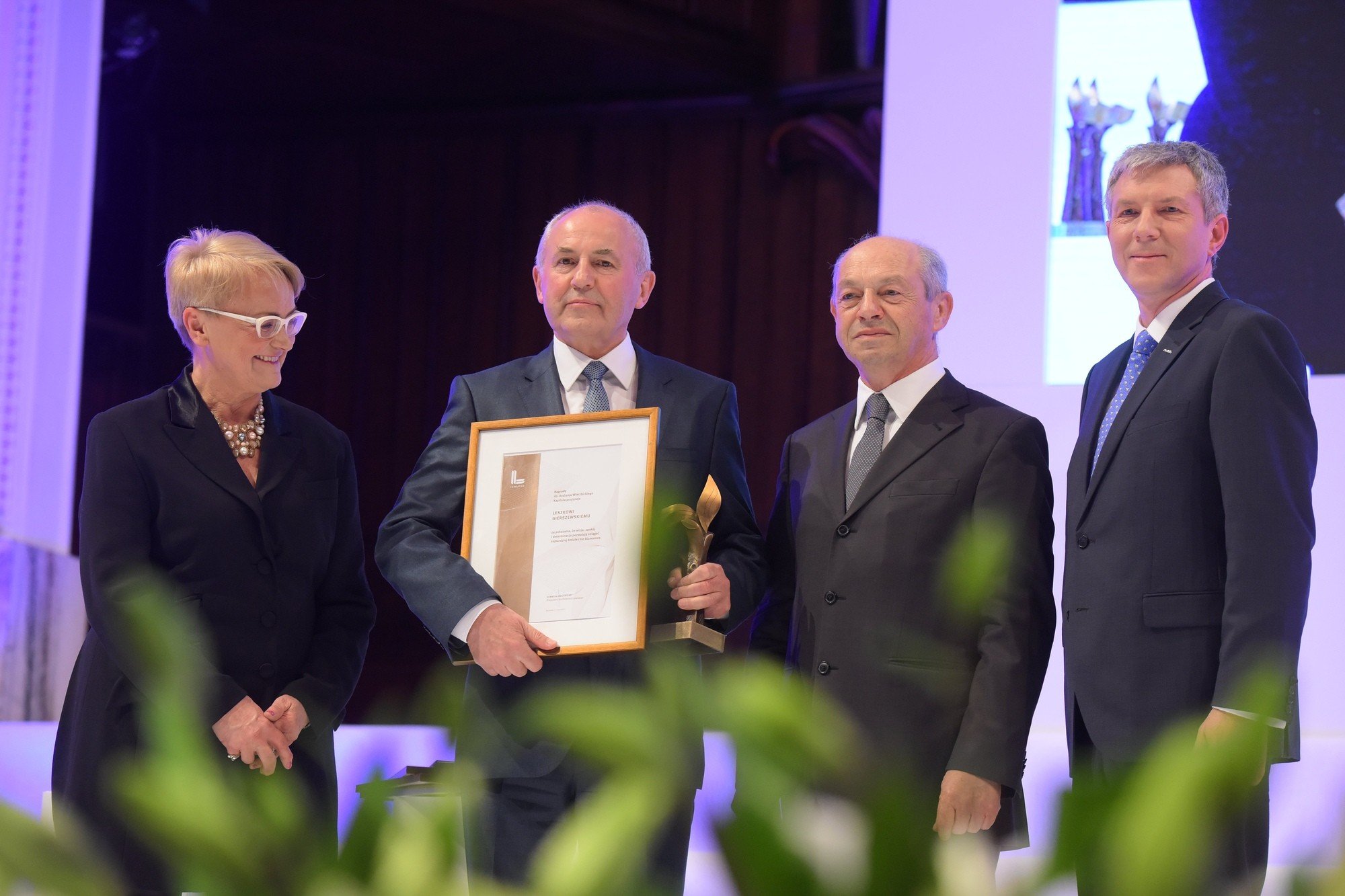 The President of DRUTEX S.A. has been awarded by Lewiatan Confederation!

The President of the company, Leszek Gierszewski, has been awarded  the Andrzej Wierzbicki prize, given by Lewiatan Confederation of Private Employers. The jury selected Leszek Gierszewski as an outstanding Polish entrepreneur for proving that vision and determination allow achieving the most audacious business goals. The jury recognized business success and the construction of an enterprise that is flourishing in European market.

The Andrzej Wierzbicki award is a prize given to the entrepreneur who has achieved success in business, and who simultaneously works actively for the environment where he functions. The award is given to the person who not only manages the company efficiently, but also feels the need to cooperate in activities to support entrepreneurs, to promote good economic and social initiatives, and has a vision of developing responsible business.

This year marks the 20th edition of the competition organised by Lewiatan Confederation. Apart from the Andrzej Wierzbicki Award given to the President Gierszewski, the organisation presented the Władysław Grabowski Award for  prominent personality from public life who significantly contributed to the development of entrepreneurship, the Special Award of the Board of Directors for the person with extraordinary merits in the area of culture, politics, science, public life and economy, as well as an award For  Bold Thinking that has been given since 2012 by the Board of Directors and the Barbara Skarga Foundation for Thinking.

Annual nominations for the awards are submitted by business and regional associations, invididual members and members of  the Council of Lewiatan Confederation.

„The award given by Lewiatan Confederation represents one of the most important distinctions in the area of business in Poland. It is a huge honour and, and the same time, a confirmation that our strategy of dynamic growth, whose priority is innovativeness, technological advancement and professionalism, has been efficient and, above all, appreciated. Today DRUTEX is the biggest window producer in Europe and we are continuously strengthening our position in Europe, which results in investment in capacity, products and marketing. We don’t lack ambition and courage to act. This is why I think the best is yet to come.” – comments the president of DRUTEX S.A., Leszek Gierszewski.

Lewiatan is the most influential Polish business organisation that represents the interests of employers in Poland and the European Union. It has more than 3900 member companies which employ altogether over 900 000 people. It is the only Polish organization to have a representation in Brussels, and it belongs to BUSINESSEUROPE – the biggest European organization that represents the interests of entrepreneurs and employers in dealing with the European Commission, the European Parliament and other EU institutions.

The formal award ceremony took place on May 11 at the Warsaw Philharmonic Hall.

DRUTEX receives the Superbrands title for the 7th time
DRUTEX has been one of the best-known Polish brands for ages, trusted by clients and business partners worldwide.
More